March 8, 1996 - Now I'm really sick. I got a runny nose that just won't stop, my head feels messed up and all I can do is stand around and cough. Actifed, Sudafed and vitamin C have no effect. I thought I should be over this cold by now. I stay in bed the entire day and we stay at Carpentina

March 9, 1996 - Feeling better, but still not well enough to drive. Still coughing a lot. We decide to stay another day in Carpentina.

March 10, 1996 - We finally leave Carpenteria St. Park and head to Santa Monica. Drove to my Aunt Julie's place in Brentwood, just blocks away from OJ's place. Drove to Montery Park (which is a massive china town), had lunch and then went to the Huntington garden and library. My cold is now under control with Thera-Flu tablets, so I'm not as contagious as before. We'll stay at Julie's for a while. Gas mileage on the RV looks like 11 MPG at 50 MPH, 9.5 at 55 MPH and 8 at 60MPH. So it pays to go slow. 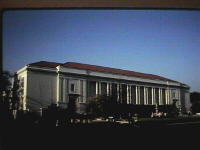 March 11, 1996 I'm using slide film, so I found a place that will develop slides in just 2 hours. Costs $5.70/ 24 shot roll. Not cheap, but I can see what I've been taking pictures of. The last 4 pictures were taken from slides transferred onto video tape. We head to Beverly Hills and Hollywood to take pictures. 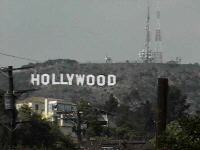 March 12, 1996 - Today, I get set up. One of the family friends knows a girl I can meet. We all meet for lunch at a chinese restaurant. I try to do my best to hold up my end of the conversation, but everyone speaks Chinese! One of my cousins just happens to be there also, which is a pleasant surprise.

March 13, 1996 - This stopover in LA is turning out to be one Chinese restaurant after another. We visit a family friend's restaurant for lunch today. If I stay here any longer, I'm going to have to learn Chinese. Later , I take a big nap since my cold is still bothering me.

March 15, 1996 - We leave my Aunt Julie's place and head to Museum Row in LA to check out the La Brea Tar pits. Looked more like the La Brea scum pond - not much to see. At night, I went out with the girl that the relatives were setting me up with. I tried to go to the Improvisation in Hollywood, but they were sold out, so we found a nearby Argentinian restaurant for dinner.