Click here to view a map of my entire RV trip.

3/1/96 - We drove to Tacoma and stopped at Camping world. We had to pick up a power cord adapter. We then had lunch at Mc Donalds. We switched drivers at the rest stops. We stopped in Vancouver for gas at $1.09 There was a big line up for gas. We then proceeded to take several wrong turns trying to get to downtown Portland. We ended going up a hill to Washington Park where there are several museums. Finally we headed into Portland and found a place to take pictures along the Marina. After taking pictures, we drove to the nearest state park. When we got there, the camp area was closed for winter. Bummer - we backtracked to the nearest RV park right next to I5. It's so close, it feels like we never left the highway! I had some trouble backing the RV into a tight hairpin turn. Then I figured out I was pointing the wrong way and had to do it all over again. We settled in, attached our cable TV and watched the Discovery channel. We baked our pizza for dinner. I'm still nursing my cold. I got a box of Sucrets for my sore throat. I think all that did was make my tongue numb. Total expenses for the day = $70.00. 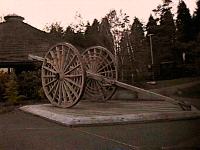 A wheel of some sort in Washington Park, Portland 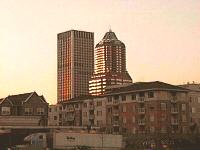 Some downtown buildings in Portland 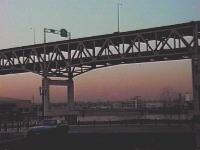 March 2, 1996 - We drove to Salem and saw the state capital. We took some pictures and got a little lost trying to get out of Salem. I tried to use my CD-ROM to get a street level map, but my CD-ROM would just turn itself off when I tried to access a particular location. I used the force to get out of town. We drove the rest of the day and went through the mountain passes near Medford.The RV had a hard time getting up the hills. It was hesitating if I tried to go faster than 40 MPH. We stopped near Medford at the Rouge River State Park. We tried microwave rice and stew for dinner. Today's expenses = $43. 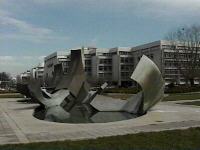 This is a fountain (turned off) in the Oregon state capital, Salem OR 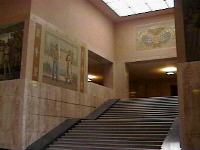 Inside the capital building, Salem, OR

3/3/96 - We got up and made a microwave breakfast of eggs, bacon and toast. I discovered that the sewer connection at our camp site had backed up - yuk, so I couldn't use it to dump the waste water from the RV. We went to the next site up and connected the sewer pipe. I used some plastic gutter to support the hose and it worked very well. Next we drove into California, past Mt. Shasta. It started to rain and get foggy. The fuel gauge was getting to Empty by the time we made it to Yureka for lunch. The pay phones don't seem to work with my acoustic coupler. It got really windy after Mt. Shasta, the RV was rocking and rolling. We ended up the day in Williams, CA just outside of Sacramento. Our RV park looked and felt something like the Mexican border with the kids running around speaking spanish. But what a deal - only $10.80 for the night. Mom made up a salmon meatloaf for dinner. Gee, we eat better on the road than we do at home! We filled up gas twice today - $60.80 + $9.87 from Fred Meyer. $70.67 total. 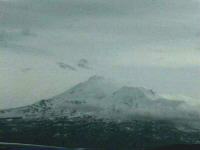 March 4, 1996 - Woke up, had oatmeal for breakfast. Drove out to Sacramento. Took pictures of the capital. The weather held out while we were there. As we drove to San Francisco, it started to get windy and rainy. We drove to Pier 39 and found some meter parking. It was pouring rain, but we waited until it stopped. Then we stopped in fisherman's wharf. Next we drove across the Golden Gate bridge. There was a warning about RV's using the right most toll booth, but I ignored it and went through a normal booth. Later I discovered the awning had broken loose. I should probably pay more attention to the signs! It was very windy. It was like driving a sail across the bridge. Then we drove to my sister Eileen's place. My brother Dave came by for a visit. I'm still coughing from my cold. I hope I don't give it to anyone else. 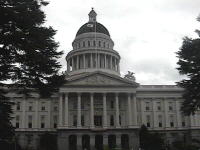 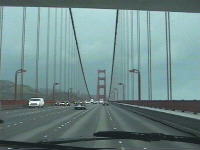 Driving across the Golden Gate Bridge - and almost getting blown off

March 5, 1996 - We parked the RV in front of Eileen's house. I went to visit a freind in San Mateo. Later I stopped by at Stanford to take some pictures. Dave entertained Mom the entire day. We had take out chinese food for dinner. Dave helped to install a blinking LED alarm indicator into the RV.

Some guy thinking at Stanford

March 6, 1996 - We tried to get the cruise control to work, but no luck. We left for LA around noon. We got as far as Paso Robles which is about 1/2 hour north of San Luis Obispo. My cold is still making it tough to drive for long periods of time. We stopped off at Taco Bell for lunch. The RV got 11 MPG today - a record. I was driving at a leisurely 50MPH most of the way. We should be in LA by tommorrow evening.

March 7, 1996 - We head off for LA but we have to keep on stopping because I get too tired driving. We stop off at a Pismo Beach park and have lunch. We then stopped at Carpentina state park about 2 hours from LA. We get there just in time for the sunset. 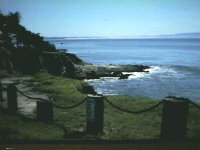 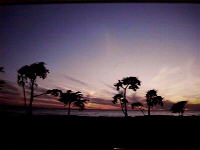