April 13, 1996 - We go in search of the mythical Route 66. I don't see the route marked on any map - only interstate 40. Turns out route 66 died out a long time ago when the interstate was built and it is really hard to follow the old route 66. We drop off at the Route 66 and Barbed wire museum in McLean Texas. With our Route 66 pamphlet in hand, we seek the mother road. As you drive along you can see the long abandoned bones of hotels and gas stations. It is so windy today that we stop around 4:00PM and camp. Winds are 30-40MPH with tumbleweeds blowing by. 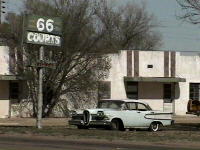 An Edsel on Route 66

April 14, 1996 - Santa Fe is the capitol of New Mexico and it's 7000 feet high. Unfortuantely, the RV has a problem with high altitude and it hesitates going up hill. I had to slow down to 15MPH to make it up a hill. Many of the buildings are in a pueblo style. The capitol itself is a round building. Santa Fe claims to have the oldest church and house in America. 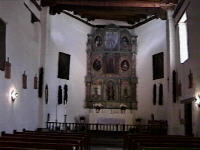 Inside the oldest church in America - Santa Fe, NM

April 15, 1996 - We have fix the problem that the RV is having on hills, so we take the RV to an engine shop. They say that the fuel is getting too hot and vaporizing in the line. To fix it, they need to install an electric fuel pump. So three hours and $300 later, we're back on the road and climbing hills with no problem.

April 16, 1996 - We visit one of natures wonders - Petrified forest National Park. The multicolored layers of clay in the painted desert part of the park are magnificent. Pictures and video don't do it justice. Then there's tons of petrified wood. It's strewn all about in a multicolor array. 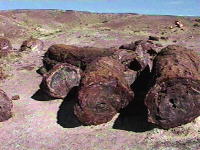 April 17, 1996 - It's a killer meteor! Or at least it was 50,000 years ago when in slammed into the Arizona desert. Today, it's Meteor Crater and we toured it today. There is a museum that explains the meteor and it also has a space exploration exhibit. After visiting the crater we head to a place where the indians decided to live on a cliff. Seems like a strange place to live. We end the day in Flagstaff, AZ. Since the campground costs as much as a motel, we decide to stay at a motel. I also got a cruise control kit from the auto parts store and I put it in. Guess what, I can't get the RV to start. It just turns over but won't start. 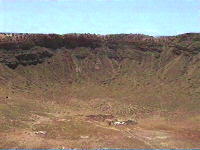 April 18. 1996 OK - I put in the cruise control and now I can't get the car to start. Time to get the professionals - so I walk over to a local garage and ask for a mechanic. The 16 year old sitting on the chair says he's the mechanic. Not being too choosy, I show him the RV and he starts working on the RV. It turns out that it was just badly flooded and the choke had to be manually opened in order to start the RV. So the wonder-kid mechanic comes to the rescue. We leave Flagstaff and head for the Grand Canyon. It's very windy and cloudy when we get there. The light was changing all the time with shadows on in the canyon. 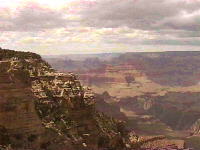 The Grand Canyon on a windy, cloudy day 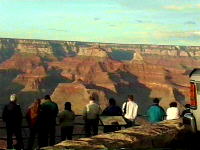 Hanging out for the sunset

April 19, 1996 - Now that we've seen the west side of grand canyon, we see the East side of the canyon. Today, it is clear, bright blue sky. Before we leave, I permanently mount the cruise control underneath the RV. Mom is buying lots of Indian jewlery along the way.