March 30, 1996 - Today, we wake up to rain and thunder- of biblical proportions. The campground starts to flood with about 5 inches on the ground. Fortunately, it doesn't get any higher. I have to use my heavy duty weather boots to unhook the RV and seek higher ground. We visit the National Aviation Museum in Pensacola, FL - home of the Blue Angels. It's a huge place with every possible type of aircraft. They have a mock up of an aircraft carrier deck and they have the Blue Angels hanging from the ceiling. We end the day at Marianna, FL - about an hour from Tallahasse.

The Blue Angels - upclose and personal

March 31, 1996 - We visit the capitol of Florida in Talahasse, Fl. They build a skyscraper capitol and turned the old capitol into a Museum. We end the day in Live Oak, FL. The campground is by the Suwanne river - the same one in the famous song. 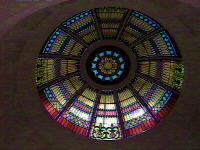 Stained glass dome in the old capitol of Florida

April 1, 1996 - A few minutes after we left the campground, the engine in the RV mysteriously dies. We pull off and I found that my Battery Buddy had cut off power from the battery. The Battery Buddy is supposed to do this when the power level is low enough to prevent the car from starting. I reset the Battery Buddy and we drive to the next rest stop. It looked like the charging system wasn't working and the battery was being drained. I stopped by the nearest auto parts store and they confirmed that the charging system wasn't working. So, being the handyman that I am, I removed the alternator from the RV. The auto store tested it and it was OK. I put the alternator back and tried replacing the voltage regulator - no luck - still doesn't work. I give up and drive to the local RV dealer. They call their mechanic and they find that the main lead from the alternator had shorted out and burnt out a main lead wire. They fix it in half an hour and we're back on our way. Seems like I've seen a lot of mechanics lately. Oh well, we're still running after 4000 miles. At sunset, we make it to our campground near Disney World. They had a special deal where if you sit through their 90 minute sales pitch, you can stay 3 nights for the price of 1. I can resist a sales pitch - can't I????

April 2, 1996 - When we show up for the sales pitch, there aren't enough sales reps - so they let us go - just as well, we weren't going to buy anyways. Then it was on to Universal Studios. The first ride is the Back to the Future ride! It moves extremely fast and Mom can't bare to open her eyes. They should call it the "whiplash ride" since your head gets bonked against the back of the seat several times. There are several simulator rides and they all basically have the plot where you have to fly after the bad guy to save the day. I think we managed to go on all the rides before the New Orleans Mardi Gras Parade. I caught some beads and coins. 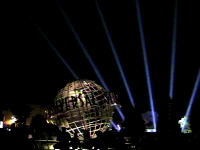 April 3, 1996 - Epcot - here we come! We first head for the Body Wars ride - since it was early, there was only a 10 minute wait. Just an hour later, the wait stretched to 45 minutes. The wait for the most popular rides is 40 minutes. After 7:00, the wait times drop to 10 minutes. One of the most impressive shows was the "Honey, I shrunk the audience" movie which included not only 3-d, but shake-mice-scratch-spit-o-vision. We didn't get to see everything at Epcot, but we saw enough! 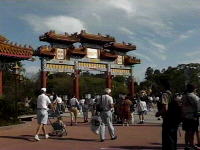 The China Gate at Epcot

April 4 1996 - Traffic was piled up on our way to Cape Canaveral. There is a museum at Spaceport USA. They have Neil Armstrong's space suit on display and a full scale model of the Space Shuttle that you can walk through. We end the day at Daytona Beach. 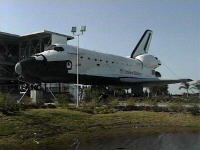 April 5, 1996 - After all that walking, we need a break! So we sleep in today. Next we head to Daytona Beach and spent a few hours walking around and people watching. We drove onto the beach and parked. Then we put up the awning on the RV. We had some difficulty putting the awning back - so when in doubt - read the instructions. There was a lever I wasn't putting up. We then head north on our way to Atlanta

Hanging out at the beach