March 22, 1996 - We pass through Davy Crockett country. Our destination is the Caverns of Sonora. They have a lot of weird rock formations. They also have a campground, so we stay for the night. During the evening a try out my telescope and we take a look at a comet visible in the sky. 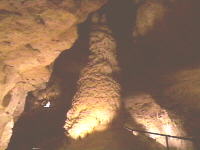 A rock formation in the Caverns of Sonora

March 23, 1996 - I remember the Alamo, but the bigger question is, where is the Alamo? We drive into San Antonio, and follow the Alamo signs to -- nowhere. So we stop and hike around. Still no sign of the Alamo ... we ask questions. Finally, we find it. We also find an AT&T 2000 payphone, so I can update my web page at the Hilton. Unfortunately, it doesn't work! I spend half an hour trying to get a connection.

March 24, 1996 - We visit Austin TX, the capital of Texas. First, we visit the Lyndon B Johnson library. We walk around the capital and take pictures. We also dropped by the botanical gardens, but there wasn't much to see. We end the day in the city of Columbus.

Inside the LBJ library

Inside the Texas state capital dome

March 25, 1996 - Well, looks like I finally beat that cold. For the first day, I'm symptom free - gee, that only took a month. Mom is also over her cold, but she still has some asthma problems at night. We got a high performance air filter/ionizer fan for $50 and it does a good job of cleaning up the air. Today, I decide that I will attempt to fix the cruise control. I performed a 3 hour operation to remove, diagnose, and replace the cruise control servo. If found that there were holes in the diaphram that I plugged with electrical tape. It worked! My right foot was getting repetitive strain injury, so I'm glad that the cruise control works. It didn't last though, it broke again at the end of the day, so I took it apart and fixed it again. After repairing the cruise control, we drove into Houston. There was a park were we could take pictures of the skyline. We end the day half-way between Houston and the Texas border in a town called Wallisville. 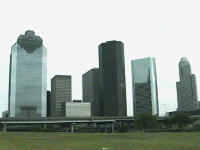 March 26, 1996 - I got the oil changed on the RV today. We've gone over 3,000 miles so far. I also got spare fan belts for the RV. Some of the fan belts look worn. We drive into Louisiana today. The rest stop has a walkway through a swamp.

March 27, 1996 - We visit the capitol of Louisiana today. Instead of a classic dome design, they build a 30 story skyscraper with an observation deck. After touring the capital - disaster strikes! We were driving along and all the sudden - boom!, thump, thump, thump, thump. One of our rear wheels blows out. I slow down and stop on the side of the road. Being completely prepared, I consult my big Trailer Life campground directory and call a local campground up on my cell phone for a recommendation for emergency road service. The GoodYear guys come in 20 minutes and change the tire for me. I followed them into town to get a new tire to replace the spare. The cost for the road service is $25 - this should be covered by my road insurance and a new tire cost $110. So my cell phone, camp directory, and road insurance come to the rescue. 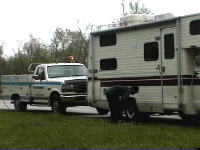 Being rescued on the road

March 29, 1996 - After having a tire blow out, I got worried about a fan belt failing since there were cracks in the belts. So I tried to change the fan belts. I couldn't figure out how to do it, so I took it to the local car repair shop to do it. I also had them add freon to the air conditioner. 3 hours and $118 later, we're ready to hit the road again. There is a NASA museum in the area, so we visit. They test the space shuttle engines. They have a museum that includes a real space suit from the Apollo 13 mission. The also have a space shuttle fuel tank and boosters. We end the day in Pensacola, FL 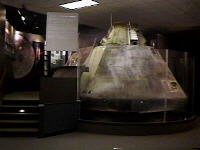